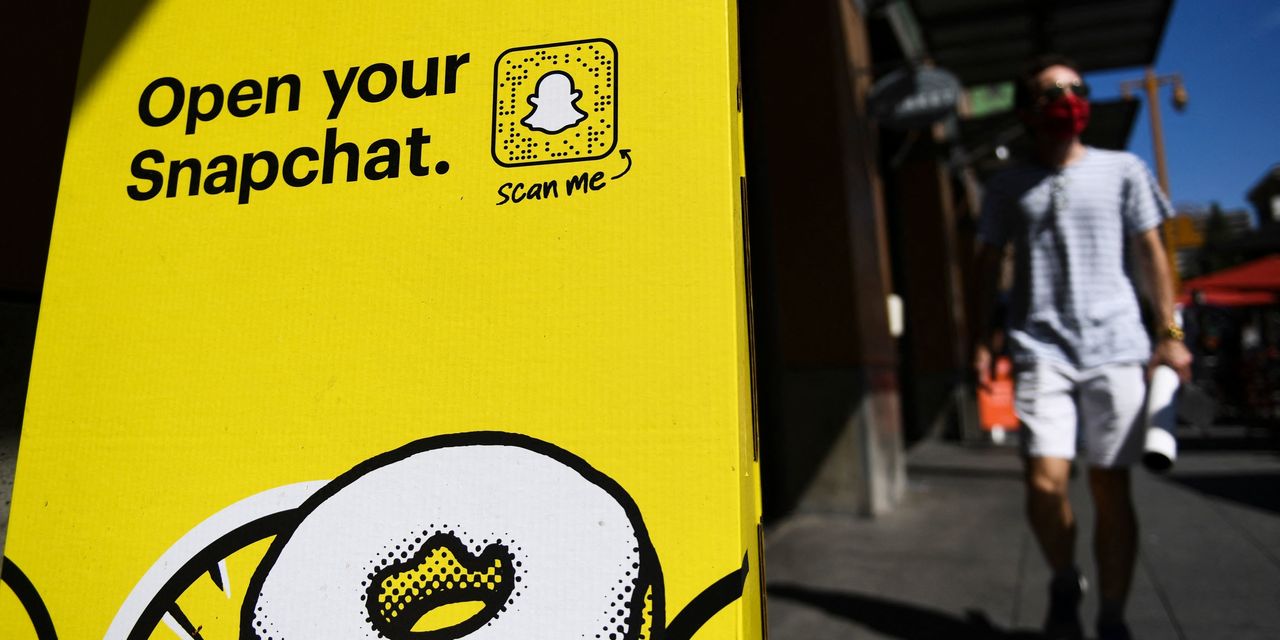 Snap, SNAP -28.08% in an investor letter Thursday, said it is operating on an assumption of no revenue growth this quarter from the year-ago period​, even though it has seen about 9% growth so far for the period​. Analysts surveyed by FactSet have been expecting almost 7% growth for the fourth quarter

Snap shares fell 26% in early trading Friday. The downdraft hit other social-media shares, with Facebook parent Meta Platforms down around 3%.

The parent of the Snapchat app is among several social-media companies that have been struggling to respond to the sagging ad market and privacy policy changes Apple Inc. introduced last year that make it more difficult to target ads and track their performance.

“We expect that the operating environment will continue to be challenging in the months ahead,” Snap said in its third-quarter results Thursday.

Snap said it generated $1.13 billion in sales in the most recent quarter, or 6% above the year-earlier figure. That was the slowest rate of growth since going public and below the 8% figure Snap said in August it was seeing. The sales figure narrowly missed Wall Street expectations, though its $360 million loss for the period was narrower than analysts surveyed by FactSet had expected.

The company, which has lost more than 85% of its value over the past year, didn’t issue detailed financial projections for the current quarter, citing market uncertainty.

Snap kicks off the quarterly results season for digital-ad-dependent companies, which have been grappling with market disruptions for more than a year. Soaring inflation, recession fears and the war in Ukraine have weighed on digital-ad spending this year, as have the Apple privacy changes.

The industry’s biggest actors, Facebook parent Meta Platforms Inc. and Google parent Alphabet Inc., report results next week. Meta is expected to post another revenue decline, following its first-ever such retreat in the prior quarter.

Concerns about a weakening economy have intensified in recent weeks. Amazon.com Inc. founder Jeff Bezos said in a tweet Tuesday that “the probabilities in this economy tell you to batten down the hatches.” A recent survey of economists by The Wall Street Journal also found that they expect the U.S. to enter a recession in the coming 12 months.

“Our advertising partners across many industries are decreasing their marketing budgets,” Snap said Thursday, attributing the pullback to an effort by customers to offset other cost pressures.

Social-media companies also are contending with fierce competition for ads, particularly from TikTok. ByteDance Ltd., TikTok’s parent, has invested heavily to boost the short-video app. Bytedance generated nearly $62 billion in revenue last year, and more than $18 billion during the first three months of this year.

“A major reason for Snap’s difficulties is direct competition from TikTok, in terms of users and usage and advertisers and advertising. And while Snap seems to be back on its heels, TikTok has been investing and growing aggressively,” said Scott Kessler, an analyst at research firm Third Bridge Group Ltd.

The ad downturn drove Snap in August to announce sweeping belt tightening. The company said it would lay off 20% of staff and cut several projects that it designated not core to its business as a self-described camera company. The measures are aimed at saving $500 million in annual costs, Snap said at the time. It also said its chief business officer and another ad executive were leaving for Netflix Inc.

Snap Chief Executive Evan Spiegel said more restructuring may be ahead for the company. “We’re certainly not done with this process because we see more opportunity to streamline and improve the way we serve our advertising partners,” he told analysts.

The company hired two executives from Alphabet to help it address the problems posed by the Apple changes and has taken steps to lessen its reliance on the digital-ad market. Over the summer, it introduced a $3.99-a-month subscription called Snapchat+ that gives patrons access to exclusive features. Snap said it passed 1.5 million subscribers in the third quarter.

“Looking forward, our focus will be on improving the subscription funnel from awareness to conversion,” Snap said in the letter to investors.

The company also said it would expand advertising tests within Spotlight, its TikTok competitor, this quarter.

Corrections & Amplifications
The parent of the TikTok app ByteDance generated nearly $62 billion in revenue last year. An earlier version of this article incorrectly said TikTok did. (Corrected on Oct. 21.)