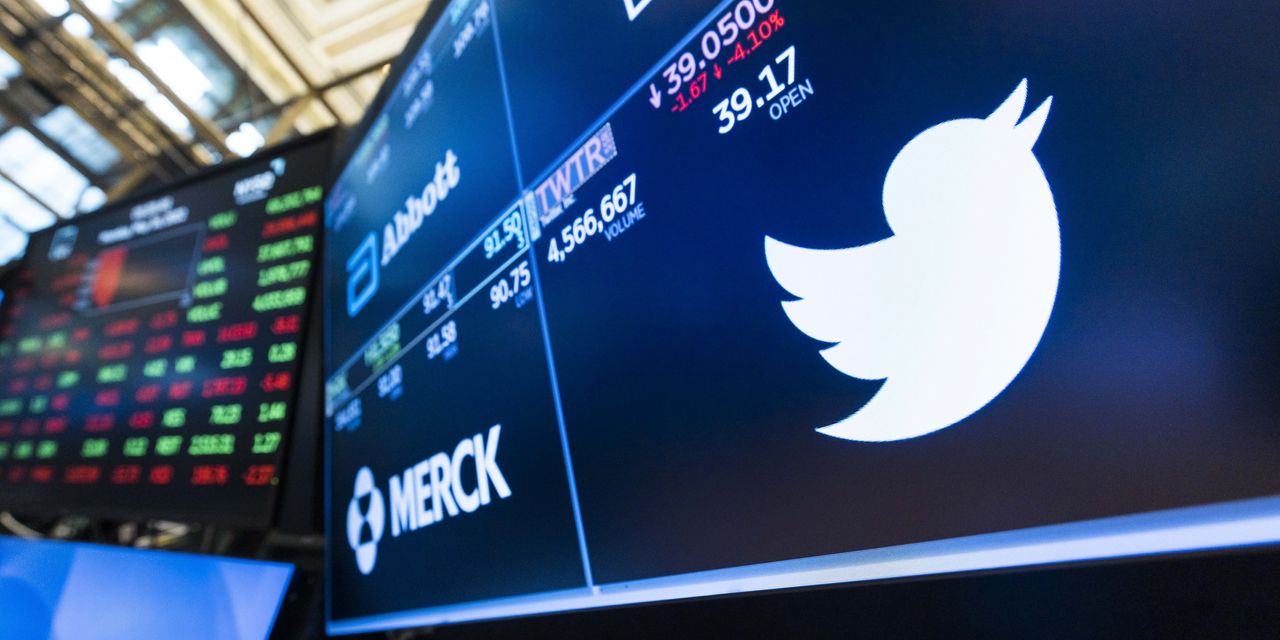 Elon Musk’s effort to terminate his deal to buy Twitter Inc. TWTR -8.48% sent shares of the social-media company tumbling, as investors prepare for what is expected to be a messy courtroom battle.

Twitter shares fell 6.7% to $34.35 shortly after the opening bell, putting shares on pace for their biggest drop in nearly two months. The move follows Mr. Musk’s disclosure to securities regulators Friday that he is seeking to abandon his $44 billion deal to buy Twitter and take it private, saying that the company hasn’t provided the information he needs to assess the prevalence of fake or spam accounts.

Twitter stock is trading about 37% below the $54.20-a-share price at which Mr. Musk agreed to buy the company in April, marking a stunning turnaround for what has been considered the buzziest deal of the year. Its shares also are trading below where they were in early April before Mr. Musk took a surprise 9% stake in the company, which officially kicked off his takeover attempt.

Mr. Musk’s bid to buy Twitter has spurred a wild ride in shares of both Tesla Inc. and the social-media company at a time when stocks around the globe have been falling. Mr. Musk is chief executive of the electric-car maker and sold Tesla stock this year after agreeing to buy Twitter.

Since then, shares of both companies have fallen into a deeper slump. Tesla’s and Twitter’s shares have tumbled around 27% and 34%, respectively, since the deal was announced, compared with a 10% drop for the S&P 500.

Fears about inflation and a potential recession on the horizon have dragged stocks sharply lower and especially punished shares of technology companies.

The technology-focused Nasdaq Composite is down 27% for the year, as investors have dumped shares of tech behemoths and nonprofitable growth companies alike. Twitter also faces a darkening outlook for digital advertising, and, just last week, laid off 30% of its recruitment team.

Mr. Musk’s drama with Twitter has injected even more volatility into shares of Tesla, a stock notorious for its wild swings. Some Tesla fans said they were concerned that Mr. Musk would lose focus from the electric-vehicle maker with the new initiative, which weighed on the company’s shares.

Tesla shares have remained the most popular bearish bet in the U.S. market for investors during the turbulence this year. The slide in the stock also has made it the most profitable short position, according to S3 Partners data as of July 1.

Tesla’s stock already got a boost last week and was among the biggest gainers in the S&P 500, as concerns about the deal falling through swirled. On Monday, Tesla shares fell 3.6% to $725.71 shortly after the opening bell.

Now, investors, lawyers and onlookers are bracing for what could be one of the most unusual legal battles in corporate takeover history—a drama reflected in Twitter’s gyrating stock. As of Friday, the social-media company had lost more than $11 billion in market value from its closing high of $51.70 in April.

So far, traders in the options market have been wagering that the deal will eventually fizzle.

“Right now, the options market is leaning more towards they won’t” do a deal, wrote Amy Wu Silverman, a managing director at RBC Capital Markets, in a note to clients.

Two sharply different dynamics have been playing out in the market for Tesla and Twitter options, according to Ms. Wu Silverman. A measure of expected volatility in Tesla has been dropping, while it has been rising for Twitter. Traders have been paying more to protect against further losses in Twitter stock through the options market, while the cost of such insurance has edged lower in Tesla options, according to Ms. Wu Silverman.

Even ahead of Mr. Musk’s regulatory filings late Friday, Tesla options tied to the shares jumping to $760 were among the most popular in the entire market, according to data provider Trade Alert. They were behind only bets tied to the broader S&P 500 and Apple Inc. stock.

In his bid to terminate the deal, Mr. Musk said Friday that Twitter had violated the agreement, arguing that it was making critical changes to the ordinary running of the business without his consent. He also accused the company of withholding data from him. Mr. Musk doubled down on his view in the early hours of Monday with a series of characteristic memes and replies to users on Twitter.

Twitter has said previously that it has and will continue sharing information with Mr. Musk. The company now says it will pursue legal action, arguing Mr. Musk is required to close the agreed-on deal.

Write to Caitlin McCabe at caitlin.mccabe@wsj.com and Gunjan Banerji at Gunjan.Banerji@wsj.com