When Ronald Daniels was appointed president of Johns Hopkins University in 2009, he set himself a tough task that put him at odds with many of its own faculty and alumni: to abolish its longstanding but inequitable practice of “legacy admissions”, offering preferential access for students with family connections in favour of purely merit-based applications.

The legacy system remains widespread among America’s elite and intensely competitive higher education institutions, allowing those who have themselves attended — and have often pledged significant donations — to benefit from an easier path for their own children or other close relatives.

But for someone with a fierce belief in justice and concerned about the widening divisions within US society, Daniels found shocking the data for the Baltimore university’s “freshman” undergraduate class that year. It showed that 12.5 per cent were legacy students, outweighing the 9 per cent of low-income entrants eligible for federal government Pell financial aid grants.

“When we started talking about the way in which legacy seemed antithetical to the values of merit and equal opportunity, not surprisingly there were people who were concerned about what this would mean for our ability to attract philanthropic support and the devotion of the alumni to the university,” he says. 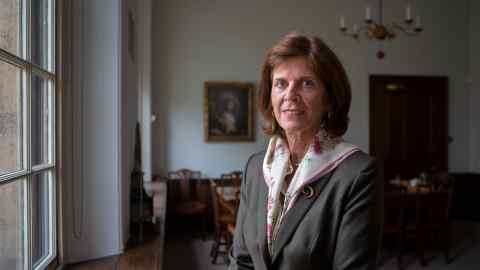 Daniels, a Canadian who studied economics and law before becoming a professor, already had form. In his role as law faculty dean at the University of Toronto, over 10 years from 1995, he had experienced — and unlike many, enjoyed — the transition from academic teaching and scholarship to management and leadership. The shift from scholarly life to academic leadership, he says, requires you to make concessions.

“There’s no shortage of memes around how hard it is to lead a university, and some would say the idea is oxymoronic,” Daniels says. “Universities are very decentralised and have no shortage of constituencies that feel they have a right to be consulted and their approval sought. There are lots of different veto points. You have to be sensitive to the rhythms and cultural values of the institution.”

But what he loves about the university is that “the currency of conversation is well understood”, he adds. “The premium on facts and principles is the mode of discourse we value. Even though it’s time consuming, once you achieve consensus, there’s very little revisitation needed.” And once the costs of change are confronted “you are able to move with some speed”.

Daniels has always sought to retain some scholarly activity, including his recent book, What Universities Owe Democracy, which is a passionate call for higher education to reverse what he describes as its polarisation and self-segregation from the rest of society, and instead to engage and promote civilised debate, understanding and liberal democracy.

In the book, he recalls one Toronto alumnus and philanthropist warning after his child was rejected admission as a legacy student: “If you really want to stand shoulder to shoulder with the great Ivy League law schools in the United States, you better start acting like one.”

For me, it was really quite foundational to be viewed as a university supporting liberal democracy

When he subsequently became provost of the University of Pennsylvania in 2005 and then president of Johns Hopkins, Daniels was instead inspired to tackle the less egalitarian ethos of the US. “For all of the progress that highly selective universities have started to make in recruiting low-income and historically under-represented students, they continue to cling tenaciously to admissions policies like legacy preferences that confer significant advantages on children of privilege,” he wrote.

Scrapping the legacy policy was only part of his campaign to make university entry more meritocratic. It also involved a rare shift to “need blind” admissions, ensuring that offers to potential students are made regardless of their ability to pay. That, in turn, required substantial assurance of financial aid to cover the costs of those on lower incomes.

“For me, it was really quite foundational to be viewed as a university supporting liberal democracy,” he says. “Given the premium on recruiting the best and the brightest to take advantage of all the benefits that we have, and have their lives transformed, I knew the financial aid limitation was deeply constraining.”

His approach was to stick to his principles while consulting widely — and risking university funds to test the proof of his approach. “I well remember the tortuous meetings with my financial office every year, asking how sustainable the policy would be. There was lots of concern about what investing in undergraduate financial aid would mean for our [academic] research mission, or for graduates if the focus was on undergraduates. There was no shortage of scepticism.”

His efforts were helped by the strong reputation of the institution, which was founded in 1876 with the claim of being America’s first research-based university. That gave it financial strength, with an endowment now valued at about $9bn, which was given a substantial boost in 2018 by Michael Bloomberg, the businessman and philanthropist, who gave a record $1.8bn donation focused on access. The former mayor of New York was himself an alumnus from a modest background.

But Daniels insists his strategy was already well under way before Bloomberg’s support arrived as an endorsement of his approach, which was leading to a more diverse and academically stronger cohort. “We put a stake in the ground as a moral imperative. We decided to set a goal, think carefully about the transition to get there and do lots of evaluation along the way so people could see the result. We moved forward in a particular direction, showed the impact, and funding has followed.”

Who is your leadership hero?

Michael Trebilcock, now an emeritus professor who was one of my law teachers at the University of Toronto. While he long eschewed formal leadership roles, he’s the quiet leader in every room who invokes facts and principles to bring about hard institutional changes. He’s an important exemplar of how you need to work to make change.

What was the first leadership lesson you learnt?

When I was first appointed law school dean at the University of Toronto, Lance Liebman, then dean of Columbia Law School, cautioned that my relationship with colleagues would change dramatically: some to implacable belligerence and criticism, others who would shower me with generous but ill-deserved praise. He advised me in either case not to take the reaction too seriously: people are not reacting to you but the office you occupy. I heeded that — at least for the first reaction!

What would you be doing if you weren’t a university president?

I’d be happily ensconced in a faculty office writing and teaching in areas of law and policy.

He sees his other big achievements at Johns Hopkins as linked to his admissions overhaul. One is his effort to promote civilised debate and free speech on and beyond campus, which emerges from encouraging a more integrated, diverse and socially engaged community of students.

The other is to foster interdisciplinary research among academics that respects traditional disciplines but also breaks down their silos to encourage innovative thinking, facilitated by 100 professorships (also funded by Bloomberg) that are jointly appointed to at least two different faculties.

He concedes that not all his initiatives have succeeded to the same degree. And describes the “halting progress” that has been made toward strengthening links between Johns Hopkins and the city of Baltimore, with funding and staff support for projects to help deprived neighbourhoods around its campus with housing, employment and education.

There were fierce debates over the merits of creating a standalone armed police force for the university. However, “after months if not years of painstaking consultation we got overwhelming majorities in the state capital,” he says. “Virtually all other public universities have a statute of one paragraph [which] allows armed policing. We ended up with 27 pages. But as a lawyer, I welcome that.”