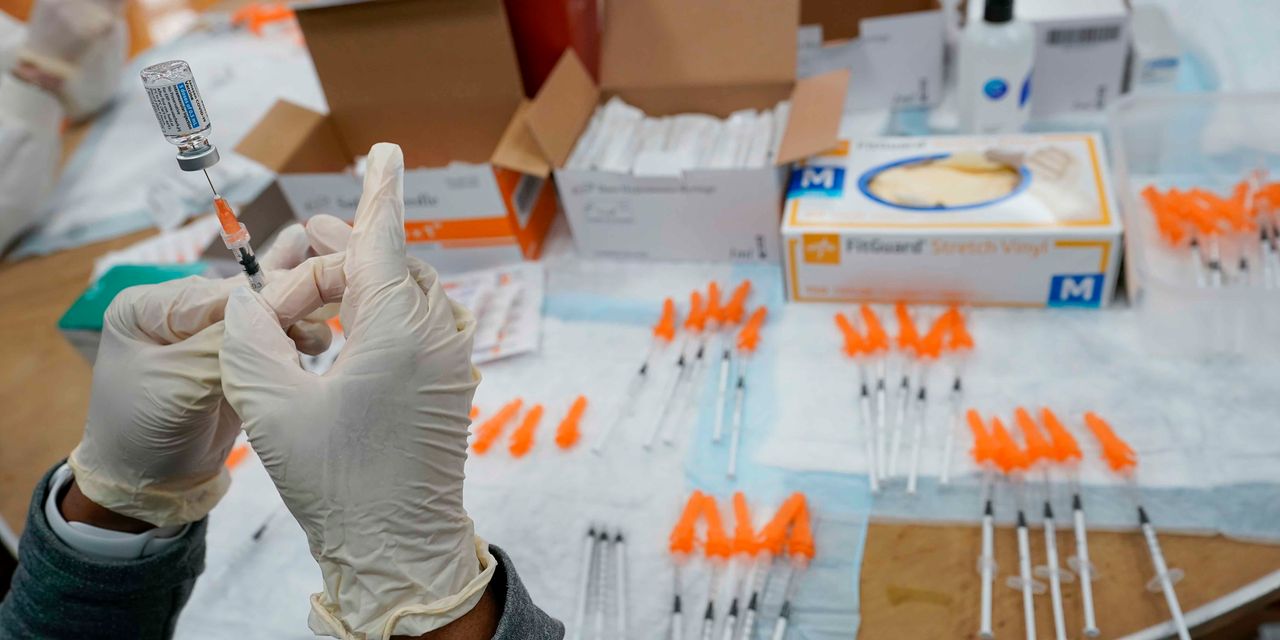 The U.S. government has halted new shipments of the Johnson & Johnson Covid-19 vaccine, according to state and federal health officials, one of several steps federal agencies are taking that could help clear a backlog of unused doses before they expire.

The U.S. Centers for Disease Control and Prevention has stopped making available the one-dose shot to states, the state and federal health officials said. The stoppage is believed to be temporary, some of these officials said.

Health officials from Maryland, Oklahoma, Arkansas, Michigan, Illinois and other states said they haven’t been able to order new supplies of J&J doses in recent weeks. Some also said they have sufficient supply of the vaccine.

Get an early-morning briefing about the coronavirus each weekday and a weekly Health newsletter when the crisis abates.

“It just hasn’t been included in our weekly allocations, from the feds, which means it is not available to order,” said Oklahoma State Department of Health Deputy Commissioner Keith Reed.

The move comes as the U.S. Food and Drug Administration separately extended the shelf life of J&J’s vaccine to 4½ months from three months once refrigerated, the drugmaker said Thursday.

It couldn’t be determined why the federal government suspended the shipments, but the policy change comes as both federal and state health officials are trying to use up J&J doses that have sat on shelves so long they are set to expire.

Public-health experts say the suspension of shipments and the vaccine’s shelf-life extension should prevent a further buildup in J&J doses and allow the existing stockpiles to be drawn down, minimizing the destruction of expiring doses.

The new expiration date “helps with the immediate issue of them not ending up in the trash can,” said Amesh Adalja, senior scholar at the Johns Hopkins Center for Health Security. He said it is crucial for states and the federal government to keep working to expand access and bring the vaccine to areas that need it. “They really just have to pull out all the stops and not waste the vaccine.”

Asked to comment on the government’s decision to limit availability of the vaccine to states, a J&J spokesman said, “We continue to work with the U.S. government and health authorities to support the use of our vaccine, which continues to play an important role, including among those who wish to be fully vaccinated with one shot.”

Just over half of the approximately 21 million J&J doses distributed in the U.S. have been administered, a lower percentage compared with shots from Pfizer Inc. and Moderna Inc., according to the CDC.

Hospital and state officials said they have many J&J doses expiring later this month, partly as an unintended consequence of the U.S.’s decision in April to temporarily suspend administration of J&J doses to assess a rare blood-clot risk.

The pause forced states and providers to cancel large blocks of appointments that were never rescheduled and left a surplus of supply and, in some areas, increased hesitancy over the J&J vaccine’s safety.

The J&J vaccine was authorized by the U.S. Food and Drug Administration in February after researchers found it to be effective in a large-scale trial at protecting against symptomatic Covid-19.

While its efficacy was slightly lower than Pfizer and Moderna shots, public-health officials and vaccine experts had high hopes for the shot’s role in the vaccine drive—because it was a single-shot and required fewer cold-chain restrictions.

J&J stores doses frozen until shipment by the government, at which point they are refrigerated. That is when the countdown starts for expiration.

A spokeswoman for the Arkansas state health department said it was informed that no doses were available for ordering because of issues related to the manufacturing of the vaccine.

Maryland last ordered J&J doses several weeks ago and has since been told by the government that the vaccine isn’t available, Maryland Department of Health Assistant Secretary Bryan Mroz said in an interview. Federal officials say J&J’s shot will become available again but didn’t say when that would be, he said.

“We’ve been using up our inventory in the state,” Mr. Mroz. “We definitely have more supply than demand.”

Mr. Mroz said that some doses will expire at the end of June and others in July and that the state is working to redistribute some to providers who request them.

A Maryland spokesman said Thursday the state would follow the new FDA guidelines extending the vaccine’s shelf life. “We are focused on getting as many of the approximately 74,000 J&J doses into as many arms as possible before they expire per the new FDA shelf-life guidelines,” he said.

The extended expiration date is likely to help states and providers that have been seeking guidance from the federal government on what to do with the expiring doses.

—Thomas M. Burton and Julie Wernau contributed to this article.

Write to Jared S. Hopkins at jared.hopkins@wsj.com and Betsy McKay at betsy.mckay+1@wsj.com

previous
Signet CEO sees more strength ahead for online jewelry sales, which doubled in latest quarter
next
Is The CFA Worth The Effort?
700 Louisiana Street , Houston TX. 77002
(+1) 832-390-2738
info@gmi-co.com