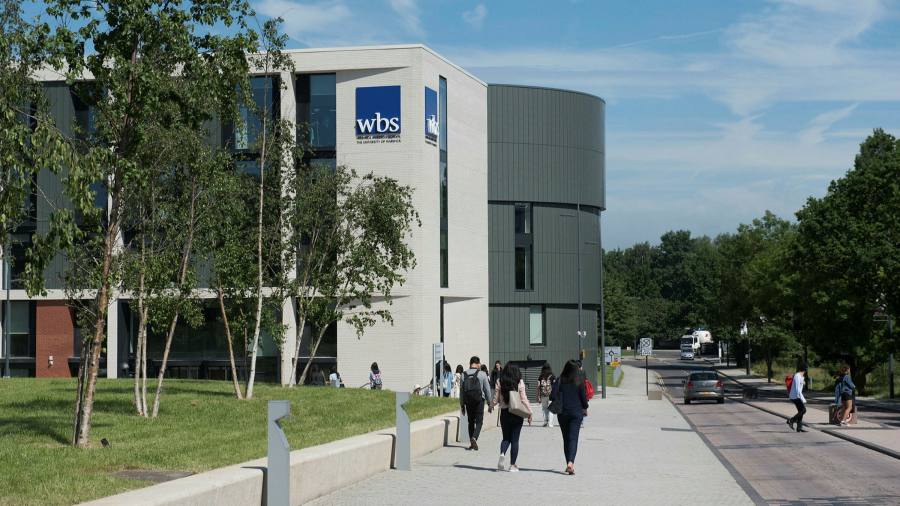 Warwick Business School in the UK has topped the FT’s global ranking of the best online MBAs, following surging demand around the world for business education courses offered remotely.

Applications for online MBAs jumped 43.5 per cent in 2020, according to a survey by the Graduate Management Admission Council, which administers the Gmat, the most widely used admissions test. That was significantly ahead of the uptick for traditional in-person MBA courses, applications for which increased by 11.6 per cent.

“We’ve seen a seismic shift in online learning,” said Prof Andy Lockett, dean of Warwick Business School, who said he was “delighted” at its leading position. He added that the school had observed “a significant increase” in demand for its course, and was expanding its classes, including those with a base in its London campus.

The economic disruption of coronavirus has caused many people to remain in or return to education, while lockdowns have accelerated the use of online platforms for study, blurring the distinction between long-established distance learning courses and in-person courses forced temporarily to shift to teaching remotely.

Online MBAs tend to be cheaper and run over longer periods, allowing students to continue working while studying, typically with asynchronous courses they can take at times convenient to them, combined with some live sessions online and periodic in-person meetings.

They are often taken by older students who already have significant work experience and are reluctant to study full-time because of personal and professional commitments.

Many providers of full-time in-person MBAs have been cautious about offering formal online versions for fear of cannibalising demand and putting pressure on tuition fees. But growing interest in online and part-time study has triggered a range of new hybrid offerings, including from ESMT in Berlin, Boston University’s Questrom School of Business and Hong Kong UST.

“For us there are two different MBA markets,” said Markus Perkmann, academic director of MBA programmes at Imperial College Business School, whose Global Online MBA (GMBA) was third in the FT ranking.

“GMBA students have more than 10 years of professional experience and many have a full-on full-time job,” he said. “The full-time MBA candidates are earlier in their career [and] chose to study as a life experience, often in their late twenties.”

In the 2014-15 academic year, 22 per cent of schools surveyed by the Association to Advance Collegiate Schools of Business, the accreditation body, offered at least one online MBA programme, but by the 2019-20 academic year that had risen to 39 per cent.

Tim Mescon, AACSB executive vice-president, said: “I think the pandemic has opened the eyes of global applicants to considering online study options they previously never would have imagined.”

The FT online MBA ranking, based on responses from business schools and their alumni, is weighted for factors including total remuneration and salary increases of students after graduation. Fifteen schools were ranked and another 23 included in a broader directory. Other schools were unable to participate because of the disruption caused by coronavirus.

previous
Digital platforms give business schools global reach
next
What is the secret of a successful MBA application?
700 Louisiana Street , Houston TX. 77002
(+1) 832-390-2738
info@gmi-co.com