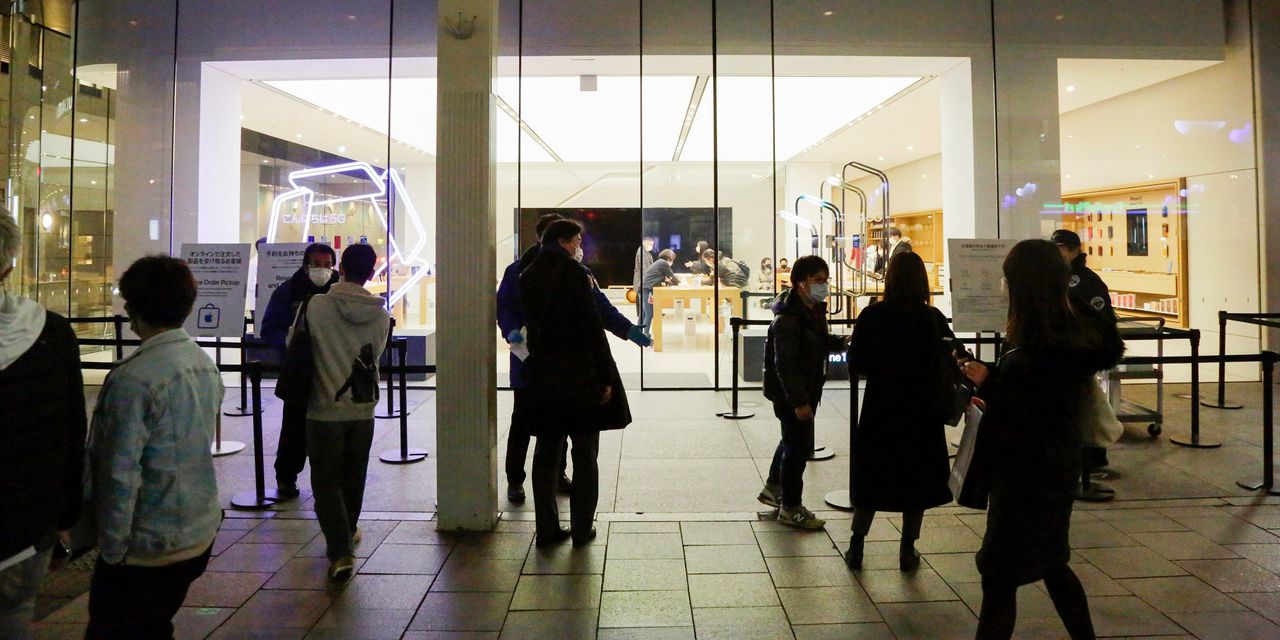 Apple Inc. AAPL -0.77% finished 2020 with its most profitable quarter ever, fueled by an uptick in higher-end iPhone sales and a pandemic-induced surge in demand for its laptops and tablets.

Profit rose 29% to $28.76 billion in the three months ended in December, its fiscal first quarter. On a per-share basis, Apple said it earned $1.68, exceeding the $1.41 predicted by analysts in a FactSet survey.

“We could not be more optimistic,” Apple Chief Executive Tim Cook said in an interview about the company’s product lineup.

The results arrived Wednesday during the biggest week for corporate earnings this quarter as Apple, Tesla Inc. and Facebook Inc. sought to appease investor concerns over whether their rapid growth will continue.

Apple’s increasing might came under sharp criticism from Facebook Chief Executive Mark Zuckerberg on Wednesday, who went so far as to point to Apple as a threat to his business, saying the iPhone maker was increasingly a rival and taking steps that could benefit its digital ecosystem over rivals.

“Apple has every incentive to use their dominant platform position to interfere with how our apps and other apps work, which they regularly do to preference their own,” he said. Apple didn’t immediately respond to a request for comment.

Apple shares rose 84% over the past year through Wednesday’s close on investor enthusiasm around its latest iPhone and heightened spending on its products from consumers working, going to school and seeking entertainment while stuck at home.

Following the results, Apple shares slid 3% to $137.77 in after-hours trading.

The holiday quarter is always a closely watched period for Apple, accounting for about 30% of its annual sales. This time around, however, it took on greater emphasis with the arrival of the iPhone 12 that some analysts and investors were betting would trigger a record boom similar to when the first large-screen iPhone was introduced in 2014. That bet, however, was thrown into question with the spread of the coronavirus last year.

The initial outbreak in China delayed the production of the flagship phone and pushed back its launch to October from its typical September debut. Some versions of the new phone didn’t start shipping to customers until November, cutting down the number of weeks Apple typically has in the period to capture sales ahead of Christmas.

What do you find most meaningful in Apple’s quarterly report? Join the conversation below.

iPhone revenue rose 17% to $65.6 billion in the December quarter. The latest iPhone has the capability of accessing the next-generation cellular network, dubbed 5G, which promises faster internet speeds. The new iPhone also helped sales rise 57% in China, which has a more developed 5G network.

In the interview, Mr. Cook said the iPhone 12 should be in balance this quarter, while he doesn’t expect iPad issues to be resolved this quarter.

For the iPhone 12, Apple introduced four versions of the lineup, including a new mini version with a starting price of $699, which was the same cost as the larger iPhone 11 a year earlier. The comparably sized iPhone 12 costs about $100 more than its predecessor, and the biggest and most expensive iPhone 12 Max begins at $1,099.

In the U.S., the average retail price of the iPhone rose to $873 from $809 a year ago, driven by buyers gravitating to the more expensive versions, according to a survey of customers by Consumer Intelligence Research Partners LLC. The improvements in pricing follow a trend under Mr. Cook to boost the average selling price of iPhones, squeezing more profit out of the devices as unit sales have fallen from a peak of 231 million in fiscal 2015.

Elsewhere, Apple said sales increased 21% for the Mac lineup and 41% for iPads. Laptop sales were helped by the arrival of the company’s new in-house chip, dubbed, the M1, according to Mr. Cook.

Apple Chief Financial Officer Luca Maestri provided a rough indication of where the current quarter was trending, saying revenue should be better than last year, when the company posted $58.3 billion in revenue for its second fiscal quarter.

Cellular carriers have used the arrival of a 5G iPhone to try to poach new customers. But it is unclear whether that is happening. The lack of killer new programs to take advantage of that 5G speed and a limited network raised questions among some analysts about the true interest of the feature as a selling point for the pricey new phones.

Of the iPhone buyers in Consumer Intelligence’s survey, only seven mentioned 5G. Most said they were motivated in buying the new iPhone because of problems with their previous phone or because of general motivations around upgrading.

(Dow Jones & Co., publisher of The Wall Street Journal, has a commercial agreement to supply news through Apple services.)

Write to Tim Higgins at Tim.Higgins@WSJ.com