“You may see this as a constraint as some non-business elements are added to the curriculum,” says Liu Qiao, dean of Guanghua. “But, from another perspective, the course addresses many of the same environmental, social, and governance topics western business schools are teaching.”

“We emphasise the Communist party’s leadership because it cares about these issues,” adds Liu.

The overhaul is likely to have far-reaching implications for how China nurtures its next generation of business leaders, as Beijing develops what it describes as a cleaner, more equitable and innovative economy in the wake of political tensions abroad and real estate turmoil at home.

Many students say they welcome the course. Lu Yining, a former financial services professional in Shanghai, says he enrolled at Guanghua this year in order to study the motivation behind China’s public policy that increasingly holds the key to business success in the world’s second-largest economy.

“It makes little sense to confront the authority,” argues Lu, referring to the backlash against Beijing’s crackdown on the “disorderly expansion of capital”. He says: “I want to understand how these policies originated.”

Guanghua is among numerous Chinese business schools that are adjusting their curriculum to champion Xi’s policy mantras, ranging from common prosperity to private sector regulation.

“The government hopes business education could serve the country’s strategic needs,” says Guanghua’s dean Liu. “That is going to create a profound impact on everything from launching new programmes and updating the curriculum, to recruiting students and placing them in the newly prioritised sectors.”

While traditional subjects, such as marketing and corporate finance, still form the basis of the curriculum, Chinese business schools have made a big push to design courses and case studies focused on China’s political economy as it grows increasingly apart from the west.

Lu Xiongwen, dean of Fudan University School of Management, says the first thing his students should study is “politics — and especially comparative politics”, so they can better navigate geopolitical tensions that weigh on business.

“We need to understand how the US turned from being very friendly with, and supportive of, China to seeing us as a major enemy,” says Lu, who encourages students to take a course on relations between the world’s top two economies.

“It is not enough to study how to price and package a product in an attractive manner,” he adds. “Huawei’s mobile phone business, which outperformed Apple for a few years, fell sharply after losing access to [US] chips. How could you understand Huawei without knowing politics?”

James Wang, an MBA student at the Shanghai Advanced Institute of Finance, says he benefited “hugely” from the financial regulation course that discussed how local government financing vehicles became a formidable force in China’s bond market.

“The best place to study LGFV bonds is China because they do not exist in other parts of the world,” says Wang.

Though public discussion of political and business topics is subject to heavy censorship in China, the country’s business schools provide more opportunity for debate.

Bai Chong-En, dean of Tsinghua University School of Economics and Management, says his students are able to have a “thorough” discussion, sometimes with opposing views, of business topics ranging from common prosperity to climate change.

“We are not aiming to make every student think in the same way,” says Bai. “We are hoping they could have a good understanding of the issues . . . so, they are able to do well by doing good.”

Guanghua’s Liu shares that view: “I won’t be a smart professor by saying you are necessarily wrong for not supporting strong regulation.”

Students also say they are free to speak their mind. Wang recalls heated discussions in class at SAIF on whether Beijing should block Ant Group’s blockbuster public listing after its founder Jack Ma made a provocative speech two years ago. The Ant listing was shelved in November 2020.

“There is nothing we can’t talk about,” says Wang. He points to how some of his classmates complained about the regulatory requirement that newly listed firms in Shanghai and Shenzhen must make more detailed disclosure of their ownership structure, following the revelation that investors with ties to senior officials had taken stakes in Ant.

But the business education reform goes beyond the curriculum. It also affects whom to admit. Multiple business schools say they prefer applicants with a background in technology or manufacturing over those with real estate or finance experience who, until a few years ago, were popular candidates.

This shift is not only a product of China’s property meltdown, but also an answer to Beijing’s call for the country’s leading business schools to focus on training technology leaders amid growing US-China rivalry and geopolitical tension.

“We have a duty to serve national interest that stresses technology innovation and prioritises the real economy over the virtual one,” says Xue Jian, deputy dean of Tsinghua SEM.

On the school’s top-ranked executive MBA programme, almost two-thirds of first-year students have worked in tech — a jump from almost 50 per cent a year ago. In contrast, the number of property and finance professionals, who once accounted for half of the student body, has shrunk “dramatically”, says Xue. 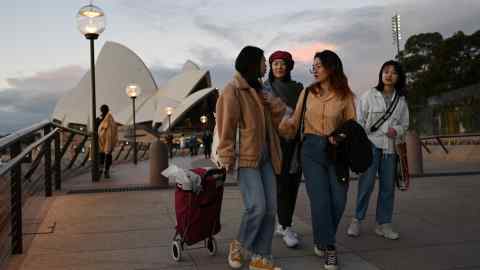 But this growing embrace of the state’s agenda by China’s top business schools raises the question of how they plan to expand their global influence. The issue is complicated by Beijing’s stringent zero-Covid policy, which has curbed international travel to and from China even as most countries have reopened borders.

At Guanghua, international students will also sit a mandatory course, called “Lecture series on contemporary China”, which aims to introduce, if not promote, the country’s political and economic policies.

“The pandemic has had a big impact on us,” explains Bai of Tsinghua SEM, adding that some students had been unable to fulfil overseas exchange programmes and international students had struggled to obtain visas to enter China.

Despite these challenges, Guanghua’s Liu says he expects foreign citizens to account for a fifth of students by 2027, provided the zero-Covid policy is no longer in place. The ratio now stands at 10 per cent.

At Fudan SoM, Lu is less ambitious about recruiting more international students than he is about promoting the use of English in business education, where China still lags behind the west “in many areas”.

“I interview faculty candidates in English,” says Lu, who does not have an overseas degree. “You can’t teach at Fudan SoM if your English is worse than mine.”