I was born in Kenya, in the Kakuma refugee camp, but I am Ethiopian by nationality. When I was eight years old, my family and I were lucky enough to get on the UN High Commissioner for Refugees programme and were relocated to a small city in Norway, where I grew up.

After an undergraduate degree in business administration in Oslo, I decided to do a masters in management abroad. I was looking for universities with practical courses, and what I liked about the programme at ESMT Berlin were the social impact projects, where students travel to a different country for five weeks to work on projects that make a difference.

I also got to go on a six-month internship, at a recycling company in Addis Ababa called Penda. It was the first time I had ever lived in Ethiopia. My experiences at the company, which collected and recycled waste paper before sending it to local paper manufacturers, helped me better understand business in the country.

It was a bit challenging at the beginning: issues with internet and power, and other problems we have to work with in Ethiopia, but support from ESMT’s careers services team helped. Luckily, I also speak the local language.

Find out which schools are in our ranking of Masters in Management degrees. Learn how the table was compiled and read the rest of our coverage at ft.com/mim

When I graduated from my masters in 2019, I joined ESMT’s Responsible Leaders Fellowship, a funded pro bono placement in a developing country. I worked as a consultant at an Ethiopian company called Taskmoby, which is a gig platform for all sorts of services. I liked the vision of the company and stayed on. Almost three years later, I now lead the operation. I have also become Ethiopia country manager at Africa118, Taskmoby’s Nairobi-based parent company.

Aside from ranking quite highly, ESMT has a reputation for helping graduates find work quickly. Quite a few classmates are still working at the company where ESMT helped them find a placement. Alumni stay in touch through LinkedIn and WhatsApp, especially about work opportunities. One classmate has joined me at Taskmoby.

We had about 80 students in the class of more than 40 nationalities, so we would get different perspectives

The masters lasted roughly two years and was very current, covering the latest trends. ESMT works closely with large German companies and would host masterclasses by top executives, who would come in and tell us about specific challenges that we would try to solve. We got a very good insight into what was happening at these companies.

We had about 80 students in the class of more than 40 nationalities, so we would get different perspectives in workshops and discussions. For example, people from Germany tended to be more direct, while people from Asia would communicate more softly. It was interesting seeing how this developed throughout the course. 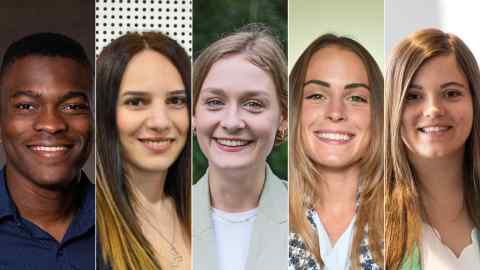 If you are looking to work internationally, those kinds of discussions teach you how to communicate with people from different parts of the world. Interacting with people who had lived and worked in many different countries helped me when I came to Ethiopia, where the culture was different from what I had been used to.

My favourite course was on strategy. It took a deep dive into what makes certain companies stronger than others and how they should best position themselves in the market or industry they are operating in. That insight has been useful at Taskmoby, as were the problem-solving skills I gained at ESMT from working with real companies and real challenges. The programme also strengthened my ability to quickly adapt, something that was useful for me, never having worked in Ethiopia before.

Ethiopia is not an easy environment to work in, but there are a lot of opportunities. My plan now is to expand Taskmoby into neighbouring countries, to bring it to more people and make it the number one gig platform in east Africa.

The security situation [there is conflict in the north of the country] has had minimal impact on our operations in the capital, Addis Ababa, but it has delayed our plans for expansion. We are, however, continuing to train service providers and carry out market assessment studies. We are now working to roll out Taskmoby in three more Ethiopian cities.

previous
Making Europe’s next generation of business leaders
next
Loeb reverses course on push to get Disney to spin off ESPN
700 Louisiana Street , Houston TX. 77002
(+1) 832-390-2738
info@gmi-co.com