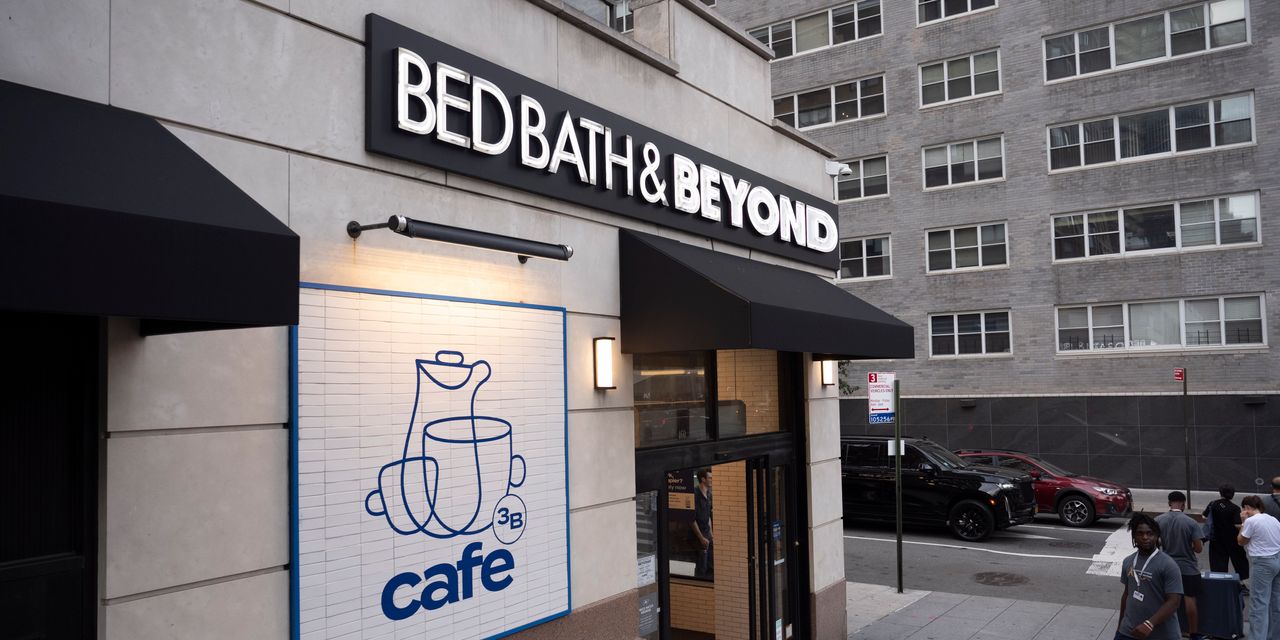 Bed Bath & Beyond Inc. BBBY -21.30% said it would close roughly 20% of its namesake stores, cut its workforce and bring in fresh cash to stabilize the business through the holiday season as the retailer confronts plunging sales.

The home-goods seller is attempting to trim costs and raise money as it tries to correct recent operating missteps and navigate a challenging economic environment. It has been burning through its cash reserves for several quarters, and a shopper exodus has shaken investor and vendor confidence.

On Wednesday, executives and directors attempted to assuage its uneasy partners. In a business update, they said the company secured commitments for more than $500 million in financing and could potentially sell as many as 12 million shares of common stock to raise money. They also pledged to overhaul the assortment of goods in the company’s stores, focusing more on national brands after spending millions to develop private-label goods.

“While there is much work ahead, our road map is clear and we’re confident that the significant changes we’ve announced today will have a positive impact on our performance,” said Sue Gove, a board member who is serving as interim chief executive.

Bed Bath & Beyond’s stock fell 21% in Wednesday trading, as the plan to sell shares could dilute the holdings of existing shareholders. The stock, a favorite among meme investors, has lost more than half its value over the past two weeks.

As of Wednesday, the company’s market value was roughly $750 million. At its peak in June 2012, the company had a valuation of more than $17.3 billion, according to FactSet data.

Founded more than 50 years ago, the Union, N.J., company had several decades of rapid growth as it became known for its big-box stores stockpiled with merchandise and 20%-off coupons. In recent years, it has wrestled with falling sales and shifting strategies.

In 2019 activist investors ousted the chain’s founders and revamped the board, saying its leaders had failed to modernize the stores and capitalize on the rise of e-commerce.

Mark Tritton, a former Target Corp. executive, joined the company in 2019 and sought to turn around the retailer by pushing deeper into private-label brands, among other initiatives. Those brands, however, weren’t well-received by shoppers and were hindered by pandemic-related supply-chain constraints.

Bed Bath & Beyond’s board ousted Mr. Tritton in June and installed Ms. Gove, a retail-restructuring consultant, as interim CEO. The company is working with search firm Russell Reynolds Associates to find a permanent CEO, and said Wednesday that the search process is continuing.

The retailer received another blow in August when billionaire activist Ryan Cohen sold his 10% stake in the company, about six months after acquiring his shares. The company’s stock, which had been rallying in previous weeks, slid after individuals followed Mr. Cohen’s selloff.

The business update came just days after the end of the company’s latest quarter, which showed the issues facing the retail chain. Comparable sales—reflecting sales at stores open at least a year—fell 26% in the quarter ended Aug. 27. The company’s operations also burned through about $325 million of its cash reserves during the period.

While the company plans to release its full second-quarter financial report on Sept. 29, preliminary results show that the money it is bringing in the door is leaving quickly. And the new financing only provides a short runway for the turnaround effort, analysts say.

The more than $500 million infusion, led by JPMorgan Chase & Co. and asset manager Sixth Street Partners, includes $375 million from a new loan and the expansion of a credit line. The Wall Street Journal had previously reported the company was near a new loan deal.

The new package will slash JPMorgan’s funded debt exposure by more than half, while providing the retailer with about $800 million in borrowing capacity. The company said it ended the latest quarter with about $200 million in cash and investments.

“Bed Bath & Beyond has a temporary reprieve from questions about its financial viability. But now the question becomes whether it can find ways to lure shoppers back,” said Zak Stambor, an analyst at Insider Intelligence, a research firm.

Compounding matters is a glut of inventory that is bedeviling a number of retailers.

Walmart Inc., Target and other chains are turning to discounts to move inventory such as home goods from store shelves to make room for holiday items, meaning that competition is heavy for the bedding, small kitchen appliances and other items that Bed Bath & Beyond sells. Ms. Gove said the company is aiming to be “the category retailer of choice” in the home and baby market.

The company said it would discontinue three of its nine house brands and refocus more of its inventory on more established brands such as Calphalon, Cuisinart and Oxo. The move was, in part, a reversal of plans implemented by Mr. Tritton.

“Our customer has communicated clearly that national brands are a really important part of their shopping experience with us,” said Mara Sirhal, who was recently named Bed Bath & Beyond brand president.

Bed Bath & Beyond said it would host a supplier event early this fall to boost the relationships it has with vendors.

Some of Bed Bath & Beyond’s suppliers have started negotiating terms to get paid faster after they struggled to secure insurance against their merchandise sent to the retailer, according to people with knowledge of the matter. At least one vendor has been negotiating terms with the company to get paid upfront, the Journal has reported.

Ms. Gove said Wednesday that addressing supply-chain issues was among her top priorities, because the company needs to increase the speed of getting product to its stores and its customers. Bed Bath & Beyond is working with an outside firm to review the retailer’s supply-chain infrastructure, the executive said.

What’s your outlook on Bed Bath & Beyond? Join the conversation below.

Cost reductions are part of the company’s turnaround push. The retailer said it would lay off about 20% of its corporate and supply-chain staffers and that it eliminated its operating- and stores-chief positions.

It will also close about 150 of the roughly 770 Bed Bath & Beyond stores, including about 50 to 60 in the first wave, finance chief Gustavo Arnal said during a conference call.

The board plans on keeping the buybuy Baby chain, which operated 135 stores as of May, under the corporate umbrella. The company had hired advisers to explore a potential sale of buybuy Baby. Overall, Bed Bath & Beyond had about 955 total stores as of May 28.

Bed Bath & Beyond said the restructuring moves announced Wednesday are expected to reduce its spending by about $250 million in the current fiscal year. It also reduced its full-year forecast on capital expenditures by $150 million.

Last week, S&P Global Ratings cut the company’s credit rating deeper into junk territory and assigned a negative outlook, indicating that it could downgrade the rating again in the near future.

—Alexander Gladstone contributed to this article.

Write to Inti Pacheco at inti.pacheco@wsj.com and Jodi Xu Klein at jodi.klein@wsj.com