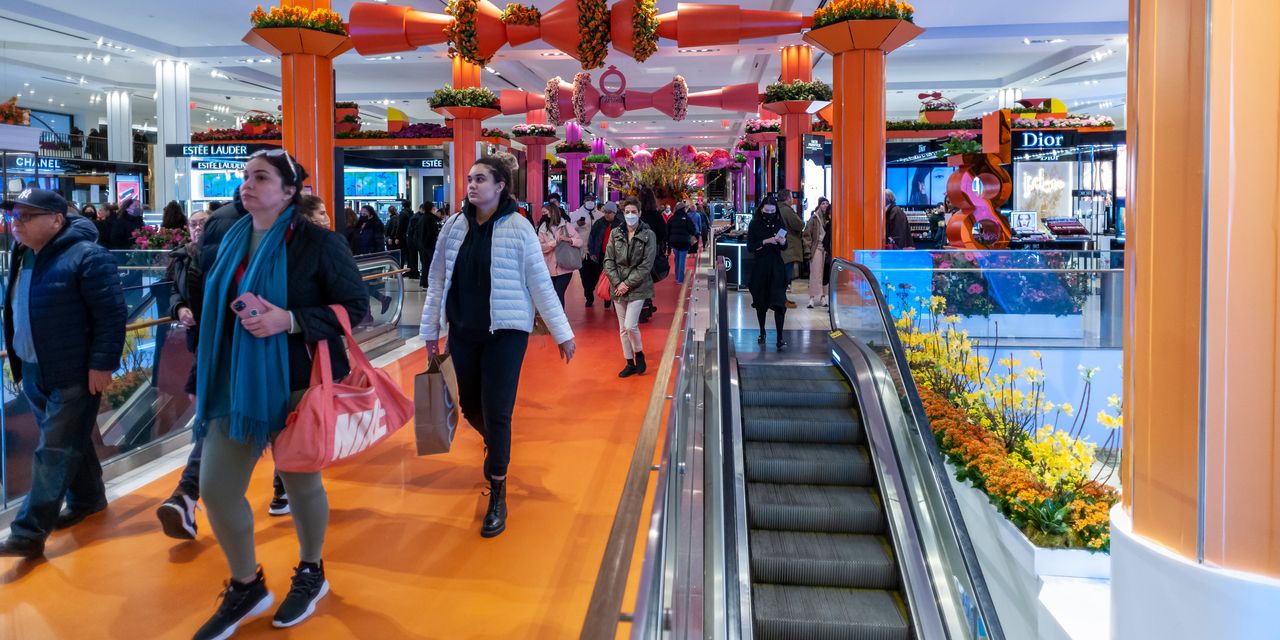 Macy’s Inc. M 3.76% became the latest retailer to lower its financial guidance for the year, citing risks of a steeper economic downturn and slowdown in consumer spending.

The New York department-store chain on Tuesday said cutting its sales and earnings forecast also takes into account the markdowns and promotions the company thinks will be needed to get rid of old inventory.

The revision comes despite the company posting better-than-expected results for its second quarter. Same-store sales, or sales from stores that have been open at least a year, fell 1.5% from the previous year. Analysts polled by FactSet expected a 2% drop.

The company’s shares rose more than 8% in morning trading. Through Monday, shares were down nearly 29% for the year.

Macy’s said its new digital marketplace, which was announced last year, will launch in the coming weeks, as the company looks for ways to expand the number of brands it sells without the costs of holding more inventory.

The marketplace will let third-party merchants sell their products on the Macy’s and Bloomingdale’s websites across many categories, including pets, baby and maternity, toys and electronics. Big-box retailers, such as Walmart Inc. and Target Corp., have had their own third-party marketplaces for years, following in the footsteps of eBay Inc. and Amazon.com Inc.

Overall inventory levels remained elevated, the company said, but were down 7% from the first quarter. Macy’s said sales have been lower since Father’s Day as it and other retailers grappled with excess inventory and a pullback in consumers’ discretionary spending.

Macy’s customers across income tiers slowed their spending, Chief Executive Jeff Gennette told analysts on a call Tuesday. Executives said customers aren’t trading down to less expensive brands, but are being more selective about what categories they shop and taking advantage of widespread promotions being offered by both Macy’s and its competitors.

“Where we still have customer-wanted categories and there’s more scarcity of product with us and with the market, we are getting the higher [average selling prices],” Mr. Gennette said.

What is your outlook for the retail industry? Join the conversation below.

The retail chain said it is implementing markdowns across several categories, including seasonal goods, its private brands and activewear and sleepwear, as it looks to clear aging stock from its shelves.

The retailer found itself with a surplus of casual clothes, activewear, home textiles and tableware this summer as shoppers began spending less on items they had preferred during earlier months of the pandemic. Dressier clothes have gained favor in recent months as people seek options to wear to the office or social engagements.

Macy’s reported that revenue was slightly lower in the second quarter compared with the same period last year, $5.6 billion from $5.65 billion.

Earnings for the period ended July 30 came in at $275 million, or 99 cents a share, from $345 million, or $1.08 a share a year earlier. Stripping out one-time items, adjusted earnings were $1 a share. Analysts had been expecting 86 cents a share.

Earlier this year, Macy’s said it wouldn’t separate its e-commerce business from its bricks-and-mortar stores amid calls from an activist investor to increase shareholder returns.

Macy’s had raised its earnings guidance in May when it reported its first-quarter results, in part to reflect its improved expectations in its credit-card revenue. Executives said card balances are rising as customers grapple with high inflation.

“We’re just taking a measured view on bad debts for the remainder of the year—we’re monitoring credit delinquencies, we’re monitoring payment rates,” Macy’s finance chief, Adrian Mitchell, told analysts. “When we look at the industry more broadly, we see that inflation is outpacing wage growth, that’s just not sustainable for the consumer.”

—Dean Seal contributed to this article.