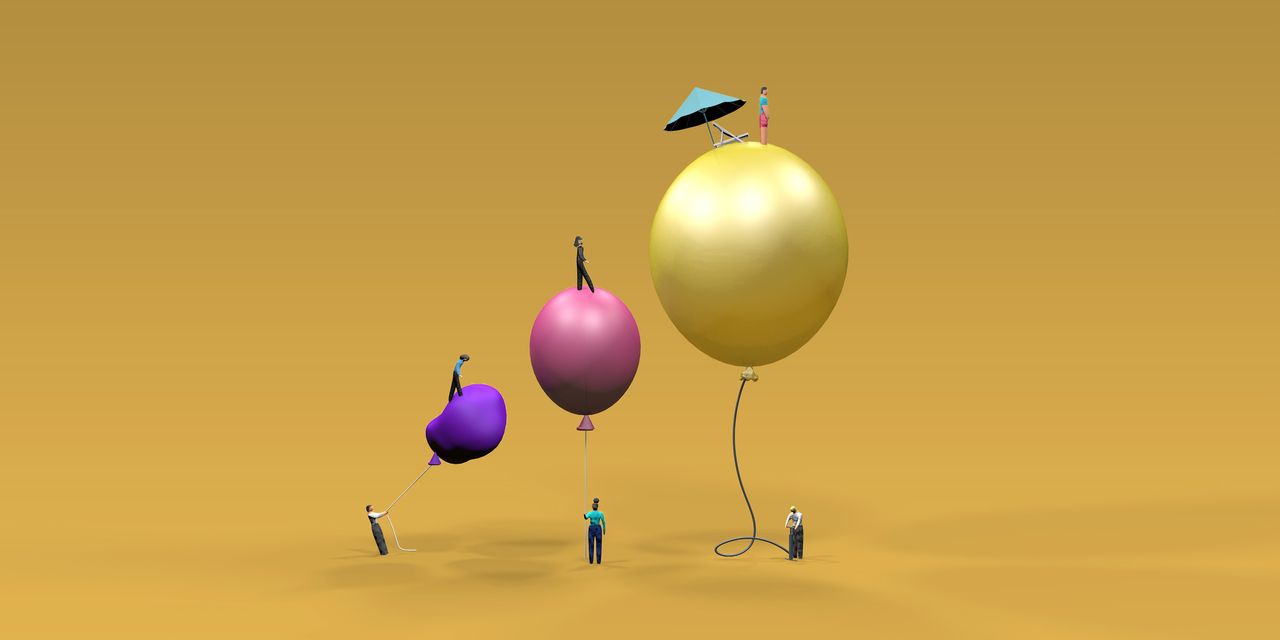 Startups are getting mixed signals as concerns about stock market volatility and the prospect of a recession clash with record amounts of capital investors have at the ready. Venture capitalists are handing out contradictory advice, some encouraging startups to spend quickly while others forecast a severe downturn that will require painful cuts.

The paradox highlights the tension between the macroeconomic reality and the incentive structure of Silicon Valley, which encourages founders and investors to spend big in pursuit of growth and returns. It also underscores the novelty of the current downturn: The dot-com crash and the 2008 financial crisis offer little guidance for navigating today’s economic challenges, fueled by a combination of the worst inflation in 40 years, Russia’s war in Ukraine, supply-chain snarls and the biggest interest-rate increases in nearly three decades.

“I personally don’t think there is a lot to be gained from the previous busts because this particular moment is so unique,” said Arun Mathew, an investor at venture-capital firm Accel. “Everyone is in this moment of uncertainty about what the next six months or the next 12 months will look like.”

It has made for a mess of contradictions. U.S. startups have laid off more than 6,000 employees since the start of July, according to tracker Layoffs.fyi. Hiring plans have been discarded and product pivots are under way, company executives say.

Other startups are taking their employees on beach-resort getaways, raising their largest-ever funding rounds or declaring, in the midst of macroeconomic turmoil, that it is business as usual.

Ali Partovi, a longtime early-stage startup investor, remains sanguine. “I don’t think we are heading into a terrible downturn,” he said. “Now is actually the time to speed up and I wouldn’t listen to others telling you to save your money.”

Mr. Partovi’s rationale: Inflation is like a leaky bucket. The money startups are saving today is worth less tomorrow, so they are better off investing in the business. In May, Mr. Partovi said, his firm Neo’s pace of investment was more than double its monthly average in 2021.

For CEO Andrej Safundzic, nothing at all has changed about the business of running a startup, he said from Puerto Vallarta, Mexico, while taking a break from activities during a company retreat to the resort town. His two-year-old company Lumos, which helps businesses manage IT spending and compliance, is moving full steam ahead, he said, increasing its staff this year by more than 50%.

Devin Finzer, CEO of OpenSea, a marketplace for nonfungible tokens, or NFTs, is hunkering down for more bad news. “We need to prepare the company for the possibility of a prolonged downturn,” Mr. Finzer wrote in a note to his staff in mid-July. The company, last valued at $13 billion, said it laid off 20% of its workforce.

How is your business grappling with an uncertain economy? Join the conversation below.

U.S. startup investment in the second quarter slid more than 23% from both the prior quarter and from the same three-month period a year ago, according to PitchBook Data Inc. At the same time, the average deal size for the year so far is the highest on record across nearly all stages of startups. Investors are sitting on huge reserves of cash but are being more selective about where they invest, so more money is concentrated with fewer startups, venture capitalists say. U.S. venture capitalists raised $122 billion in new funds the first half of this year—that is 87% of 2021’s full-year record, according to PitchBook.

Many limited partners, the institutions and individuals who invest in venture funds, are asking venture capitalists to slow their pace of investment, startup adviser and investor Elad Gil said in a blog post. Many startup founders say they are confident the money will be there when they need it because venture partners’ pay comes from the fees and gains from investing other people’s money.

In May, Sequoia Capital gave all startup founders in its portfolio a presentation titled “Adapting to Endure,” which advised founders to conserve cash, make cuts and prepare for a long recovery. In the first half of the year, Sequoia made 22 more startup investments than it did during the same period a year ago—signaling that the firm is undeterred by the market volatility, according to a person familiar with the matter. Seventeen of those investments were part of a new startup-accelerator program launched this year, the firm said in May. Sequoia also in July closed $2.25 billion in new funding, the person familiar said.

The startup industry is a microcosm of the mixed macroeconomic signals. The U.S. economy contracted in the first and second quarters, meeting a commonly used definition of a recession, and the housing market is buckling under rising interest rates. Yet the unemployment rate has remained low, at 3.6% in June. And consumers continue to spend even in the face of 9.1% inflation, driving up retail sales in June.

“‘It’s not the best time to be super celebratory.’”

Sometimes, a startup’s response to the economic turbulence is determined by the conviction of its founder or investor.

Austin Rosen, chief executive of Electric Feel Entertainment, an entertainment company with a venture-capital arm, said of his portfolio: “We think it’s recession proof.” His startups include a vegan skin-care startup, a soda startup and a brand of hard seltzer. “The bet is that households will not rein in spending on these products,” said Mr. Rosen.

Many founders of larger startups said they are squirreling away three to four years of cash, an enormous sum, which often requires adjusting hiring plans. Thumbtack Inc., an app to hire professionals for home improvements and repairs, had a plan at the start of the year to increase its workforce by 60% from more than 1,100 currently, said CEO Marco Zappacosta. He said he has whittled that down to about 30% to 40%.

Amy Yin, founder and chief executive of OfficeTogether Inc., a startup that makes software to help companies with hybrid work setups, said she’s trimming around the edges: Fewer perks like free meals and a pause on all-company retreats, something she championed a year ago as key to bonding and morale. Plans to take her staff to Nova Scotia in August have been tabled.

“It’s not the best time to be super celebratory,” said Ms. Yin.

Velocity Global LLC, a startup that sells software to help companies hire and onboard international employees, raised $400 million in May. The round comprised the largest check lead investor Norwest Venture Partners has written in its 61-year history, said firm partner Parker Barrile: $150 million.

“We are as eager to invest as we have ever been,” said Mr. Barrile. “Will we be more careful? Sure.”

Velocity has plans for the money. Among other things, the company intends to fly its entire staff to Denver later this year for its annual company party, a spokeswoman said.

Write to Heather Somerville at Heather.Somerville@wsj.com