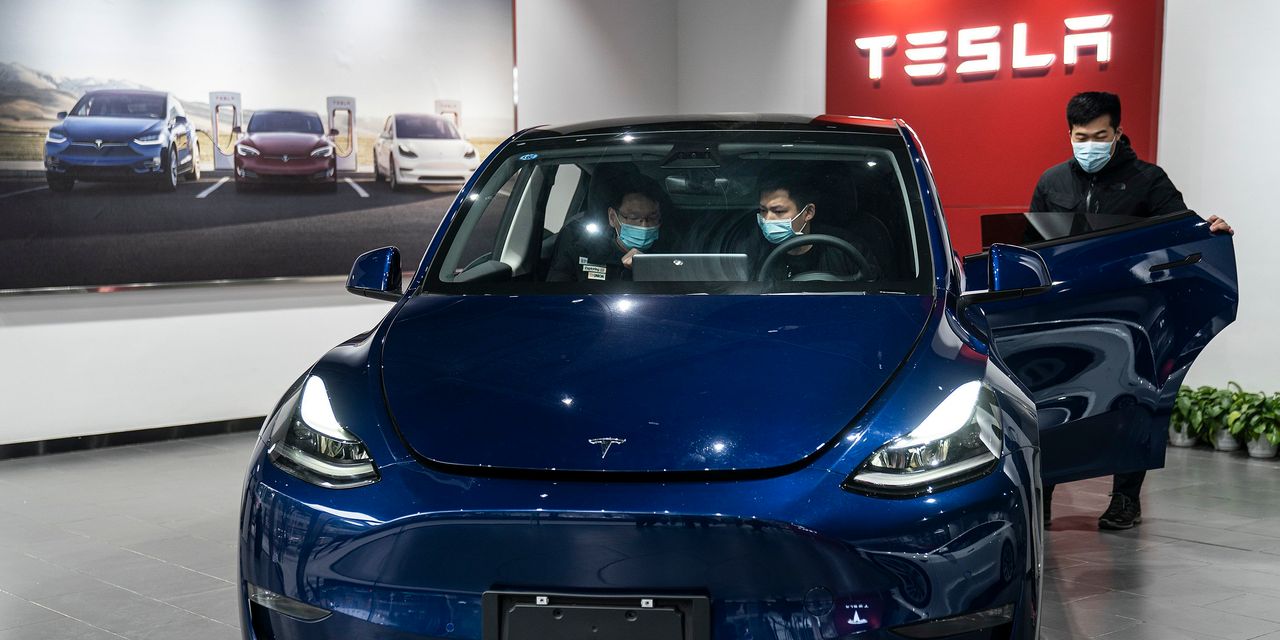 SINGAPORE—China’s government is restricting the use of Tesla Inc.’s TSLA 0.26% vehicles by military staff and employees of key state-owned companies, citing concerns that data the cars gather could be a source of national-security leaks, according to people familiar with the effort.

The move follows a government security review of the electric-vehicle maker’s products, which Chinese officials said raised concerns because Tesla vehicles’ cameras can record images constantly, the people said, and obtain data including when, how and where the vehicles are being used as well as the contact lists of mobile phones synced to them. Beijing is concerned that some data could be sent back to the U.S., the people said.

Chinese leader Xi Jinping has increasingly moved the country away from foreign technology as its technological fight with the U.S. intensifies. The move appears to mirror U.S. restrictions on communications equipment made by Chinese companies including Huawei Technologies Co., the tech giant Washington has labeled a national-security threat over concerns it could spy for Beijing—allegations that Huawei denies.

Tesla vehicles have eight surround cameras, 12 ultrasonic sensors and a radar supporting a driver-assistance system called Autopilot, the company said on its website. The Model 3 and Model Y vehicles also have a camera inside the cabin, installed above the rearview mirror.

The cameras enable a feature similar to a home-security system that lets customers monitor the area around their parked vehicle and download video. The operational and diagnostic data that Tesla vehicles regularly collect may be transmitted over the air to the company’s servers, Tesla has said, noting that owners must opt in for camera recordings to be shared. Tesla uses those recordings to improve its driver-assistance systems.

The Chinese government has told some of its agencies to ask their employees to stop driving Tesla cars to work, the people said. Some of the people said Tesla cars were also banned from driving into housing compounds of families with personnel working in sensitive industries and state agencies. The agencies told them that the government worries Tesla vehicles can be in recording mode constantly, using cameras and other sensors to log various data including short videos, among other concerns.

The restriction applies to all individuals in military complexes, government agencies and sensitive state-owned enterprises such as aerospace firms, the people familiar said. China’s State Council Information Office didn’t immediately respond to a request for comment.

Tesla declined to comment on the government’s move. It referred The Wall Street Journal to a previous comment to Chinese media over earlier data-security concerns: “Tesla’s privacy protection policy complies with Chinese laws and regulations. Tesla attaches great importance to the protection of users’ privacy,” the auto maker said. It also said in-car cameras aren’t turned on for all Tesla vehicles in China.

Governments more widely have taken steps to treat their citizens’ data as a national-security issue and restrict its storage and sharing. The Trump administration last year pushed Chinese video-sharing app TikTok to relocate data on American users to the U.S. The European Union imposed curbs on overseas data transfers two decades ago and broadly tightened policy with its General Data Protection Regulation. India has erected roadblocks through special requirements for how U.S. tech companies structure their operations and handle data collected from Indian customers.

Concerns about the use of cameras for spying around national-security facilities aren’t limited to China. The U.S. Congress passed legislation in 2018 prohibiting federal agencies from buying equipment made by several Chinese firms. The legislation was driven by concerns that use of the equipment on U.S. military installations, police departments and embassies posed security vulnerabilities the Chinese government might exploit. Rules directing agencies to stop buying the equipment and to not renew contracts involving use of the cameras has proved difficult to implement.

The China market has become increasingly important for Tesla. Deliveries in the country last year helped the company achieve roughly 500,000 vehicle deliveries globally, a record. Tesla Chief Executive Officer Elon Musk has been widely feted in China for years. The Model 3 was the bestselling electric vehicle there last year, with more than 138,000 sold, according to the China Passenger Car Association—an eighth of the 1.11 million EVs sold nationwide.

But Tesla has faced regulatory scrutiny as it ramps up production in China. Authorities summoned the company last month over consumer complaints about quality issues.

Mr. Musk is set to participate remotely Saturday in an annual, state-hosted global economic gathering in Beijing called the China Development Forum, where he is expected to make a speech. Attendees of the event generally include Chinese officials.

China has for some time treated data as a national-security matter. The country operates what is called the “Great Firewall,” limiting the services people in the country can use and the information they receive. Beijing blocks access to services run by Facebook Inc. and Alphabet Inc.’s Google, steering them toward Chinese-owned alternatives it controls increasingly tightly.

More on Tesla and Electric Vehicles

Beijing has sought to bolster China’s technology sector after Edward Snowden revealed that the U.S. National Security Agency infiltrated Chinese computer networks in 2013. Beijing has been urging government agencies to start replacing foreign technology suppliers unless security inspectors can assess the products are “safe and controllable.”

It has also released cybersecurity and data-privacy-related rules in recent years, or drafts of them. Those include a draft version of the Personal Information Protection Law, released in October, which required certain organizations that process personal data to store it in mainland China.

China has cited national-security concerns in limiting the amount of mapping foreign companies can perform in the country. The action, taken several years ago, was widely regarded as an impediment to auto makers’ and others’ efforts to develop self-driving vehicles or the software behind them.

The ability to hack video-surveillance equipment also has become a point of concern. A hacking group said earlier this month that it had accessed internal video feeds at several companies, including at least one linked to Tesla.

In recent years, auto makers globally have collected vast troves of data from cars running on the streets—relying on the cameras, sensors and computers installed on the vehicles used to detect their surroundings for safety features. Auto makers store that information in cloud-based servers.

The restrictions on Tesla appear limited when compared with U.S. actions against Huawei in recent years. Washington has lobbied allies to shut out the leading 5G-equipment maker as a Trojan horse that, once inside critical infrastructure in the West, can be used by China to spy and steal sensitive information, posing security and economic threats to the U.S. and its allies. Huawei has repeatedly said it would never do so.

Write to Keith Zhai at keith.zhai@wsj.com and Yoko Kubota at yoko.kubota@wsj.com

previous
Digital upstarts pitch alt-MBAs to learners in a hurry
next
Parents with kids in virtual school are more stressed, some use drugs and alcohol to cope, CDC study shows
700 Louisiana Street , Houston TX. 77002
(+1) 832-390-2738
info@gmi-co.com