Like many other Asian business school leaders, Gerry George in Singapore has adjusted to the pandemic’s disruptions to teaching and to health. Now his focus is tackling the longer-term economic impacts in the region.

Amid general uncertainty, the “new normal” promises further demand for high-quality teaching, a stronger regional focus in courses, and intense competition for students.

Right now, however, “our biggest challenge is trying to place students in jobs,” says Prof George, dean of the Lee Kong Chian School of Business at Singapore Management University. Countries want to support their own citizens first and recruitment is “becoming harder”.

He has been working with Singapore’s government and employers such as Mapletree, a real estate finance company, to create traineeships and internships. These offer temporary employment on a nominal salary coupled with online evening training. “If we can provide a low-cost mechanism, it’s a model to keep graduates gainfully engaged intellectually,” Prof George says.

Covid-19 affected Asia first in 2020, and generally met a robust response, which means infection in many Asian countries is now more under control than in other regions. Business schools such as Prof George’s at SMU are already preparing for face-to-face classroom-based tuition to be “the default option” from the start of 2021.

Business education providers worldwide at the onset of the pandemic were concerned about the potential effect on student numbers, either because of fears of infection or the economic aftermath. They worried many prospective applicants would stay away if teaching switched largely online. 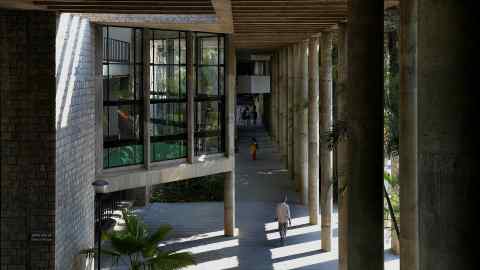 The results so far have been varied, including across the Asia-Pacific region. Australian institutions, which have relied heavily on high fee-paying foreign students — notably Chinese — have been hit hard.

David Grant, president of the Australian Business Deans Council, warned recently that without “urgent action” to match efforts by rivals, such as those in the UK and Canada, “there is a real risk of the current decline in international education in Australia becoming permanent”.

At the other extreme, business schools in Japan and India are less concerned about inflows of students from abroad, because they mainly serve domestic students. As in other countries, homegrown demand has held up or even increased for many business courses as students prefer to defer a difficult job hunt and undertake further education or training instead.

At the same time, Asian students are becoming more ambivalent about choosing business schools in other parts of the world, notably in Europe and North America.

As many of the emerging economies’ populations have grown, become richer and more internationally integrated, their students have helped compensate for stagnating demand for business education in the US. In the past decade, the share of students from the US taking the GMAT test for business school admissions has fallen from 50 per cent to 42 per cent, with much of the growth in the global business education sector coming from Asia.

But now Asian students’ appetite for studying outside the region risks being squeezed by several factors. They will be considering: constrained ability to afford fees and other costs; geopolitical tensions; coronavirus-related travel restrictions; and a perception that it may be more fulfilling, safe and reassuring to remain closer to home.

In addition, local business schools within Asia are expanding, from well-established providers in South Korea to fledgling institutions in emerging markets like Vietnam, Indonesia, the Philippines and Malaysia. In response, western schools are stepping up partnerships and creating regional campuses.

The growth in provision is creating fresh competition for students and a debate about the quality of provision. Lu Xiongwen, dean of the Fudan University School of Management in Shanghai, says that within China “leading business schools are still able to recruit enough students, but low-quality schools definitely face challenges of insufficient applications”.

He would like a greater focus generally on recruiting faculty with expertise in expanding fields such as technology, fostering more relevant research and teaching, and establishing links with business schools in other parts of the world. An example is Ceibs (China Europe International Business School) in Shanghai, which has expanded in campuses in Switzerland and Ghana.

A smaller but important trend is an increase in students from outside Asia who want to study in the region. Yet some destinations are more attractive than others. Andrew Crisp, an education consultant, detects a sharp jump in interest in Singapore, which is “perceived as having handled the pandemic well and, with the problems in Hong Kong [where Beijing has cracked down on dissent], is considered a safe place to ‘do’ Asia for international students”.

But, as Prof Lu argues, “business education will not be restricted to physical campuses”. Coronavirus has accelerated the trend for blended learning — part online, part traditional class teaching — which draws students and academics from different parts of the world. Yet students also crave the insights that come both from being located in a new place, and from studying local challenges close at hand.

“The world is changing, and it’s up to us to adapt,” says Prof George in Singapore. “As business educators, we have to think much more carefully about what we are providing, rather than generic MBAs.”

Asian schools will be at the centre of that transformation.